There are many beliefs why dogs are howling. Some believed on superstitions about howling of dogs and others are so worried why they howl. But German Shepherd howling can be explained by understanding its causes and nature. You can also learn how to stop their howling properly. This article will give you a background about the German Shepherd howling behavior.

German Shepherd Dogs originated from the races of wolves which in nature are howling. This ancestral connection is one of  the common reasons why do German Shepherds howl. This implies therefore, that German Shepherd howling is not at all negative because it is just a part of its hereditary traits.

Dogs like German Shepherds have emotional feelings. Like humans, they can also express some emotional needs. Since German Shepherd Dogs are known to be energetic and loyal, they have the tendency to feel bored and anxious. These emotions are actually expressed when they are howling.

German Shepherd Dogs are trained to be active dogs. Exercises and regular activities are one their basic needs. Lack of these things can result to their boredom. When they get bored, German Shepherd howling can be expected.

See also  Why Does My German Shepherd Follow Me Everywhere?

Like human beings who are crying when get hurt, German Shepherd can express their painful feelings through howling when they have some physical illness and injuries.

German Shepherd Dogs can react when some environmental noise occurs especially those sounds that are like sirens. Through howling, German Shepherd Dogs signals their presence in a certain place or gives warning to communicate that there is an approaching danger or to prevent intruders from entering a territory.

Have you ever wondered why do German Shepherds howl at sirens? Sirens are actually sounding with high pitch that can strongly attract German Shepherd Dogs. Since, German Shepherd Dogs are hereditarily related with wolves, it is natural for them like wolves to respond with sirens as a way of communication of their point of location as if they are telling it to other packs. What is amazing with German Shepherd Dog is that they have the advanced recognition of sounds because they have higher frequency of sound waves than humans. No doubt why  German Shepherd Dogs could hear the sirens of ambulance in a distance before we can hear it approaching.

Naturally, German Shepherd howling at night are doing such due to some various reasons. First, because they are not really used or comfortable in their crate. Secondly, they are not feeling well maybe because of hunger or thirst as well as illness or injuries. Lastly, they are seeking the attention of their owners when they are experiencing separation anxiety. You need to understand that German Shepherd Dogs needs attention and companionship. They can also howl at night in response to other howling dogs.

See also  Are German Shepherds Good With Other Dogs?

Some of the German Shepherd owners were surprised when they witnessed their German Shepherd howling with wolves in the scene of the movie, Zootopia. This reaction will not surprise you if you are already knowledgeable about the causes of German Shepherd howling. Their howling might be a result of their natural instinct as an animal in wolf lineage so they will try to howl as if they are calling the attention of other packs of wolves.

Teaching through Commands and Counter-Conditioning

In order to stop the frequent howling or control it, owners should train them by teaching them commands such as, “quiet” or “speak”. Consistent exposure with these commands along proper training procedures will help you control the howling of your German Shepherd Dog.

You can also use counter-conditioning by replacing their usual reactions with noises or situation into the desired behavior.  You can do it by replacing the howling respond from a noise by consistently rewarding a commanded howl rather than a noise-triggered howl. If you want to learn more about this topic, it will be specifically discussed in other future articles about training German Shepherd Dogs.

Give them Attention and Activities

As mentioned in the topic about the causes of German Shepherd howling, this kind of dog is prone to separation anxiety so if they felt so, howling is its primary reaction. It is therefore, advisable for owners who wants to stop them howling, basically, to give them attention. However, this attention must be given carefully by giving them right lesson such as rewarding good behavior rather than commending naughtiness so that they will not be spoiled.

You also need to check their condition when they are in crate if they are not feeling well or if they have sufficient food and water.

It is also necessary for them to have lots of activities regularly. Remember that howling might be a result of their boredom so you need to solve it by providing exercises such as walking them outside, household tasks obedience and agility training.

Finally, is consulting a professional expert about dogs or preferably with the behavior of German Shepherd breeds. They can really help you to understand German Shepherd howling because they have scientific knowledge which our mere knowledge cannot easily comprehend.

We need to be aware that German Shepherd howling is one of unique abilities of GSD. Breeders and owners should study the reasons why they howl so that they will know how to deal with this behavior properly. German Shepherd howling should not be understood with superstitions but rather with a more practical consideration and scientific approach. 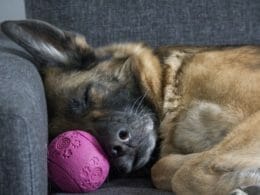 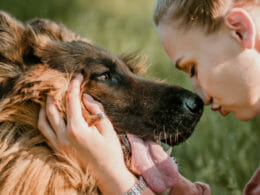 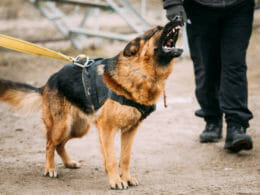 What to Do If a German Shepherd Attacks You 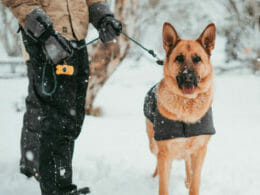