When Does Puppy Poop Become Solid?

Raising a puppy can be a fulfilling experience, but it can also be very stressful; you have to be aware of them at all times and make sure they don’t get sick or injured. Puppies are known to get runny tummies for just looking at something they shouldn’t eat, but is soft feces normal, and when should the poop become solid?

It is natural for young puppies to have softer bowel movements; however, they should not have runny stools. The poop should be evenly shaped even as newborns and become firmer as they grow. If a puppy’s feces are too soft (almost to the point of watery), it might indicate that something is wrong.

The most common puppy ailments that vets treat are runny stools and vomiting. A puppy’s stomach is very delicate, pair that with their love of chewing everything in sight, and you have a puppy with diarrhea. But what should a puppy’s poop look like, and when should you worry?

Why Is Your Puppy’s Poop Not Solid?

The thing about too soft or runny stools is that several things can be at the root of the problem. Sometimes, it is nothing to worry about, but it can also be a symptom of a serious condition. We’ll look at all the possible reasons why your puppy’s poop is not solid.

Puppies Can Have Soft Stools Due To Their Diets

Food intolerance is quite common for young dogs as their digestive systems mature. The problem could sort itself out as they grow used to the new food or worsen due to food allergies.

See also  Should You Let a Puppy Sleep in Bed With You?

Immediately switching your puppy to a new food can cause further upset, and it might seem like the new food is not helping. You should never just change food abruptly unless a vet tells you to do so. Instead, use a fraction system to help your pet get used to the food.

Puppies Can Get Runny Tummies When They Are Sick

Viral infections can be prevented with vaccinations, but there are times that we are too late. These are often fatal to young pups and can be transmitted to other dogs. Distemper and parvo are especially dangerous for dogs.

Parasites are another common ailment in puppies; most of the time, you’ll see worms in their poop, but the worms can also move into their lungs. The too soft poop is often a symptom of parasitic infections.

Puppies Can Become Sick From Eating Things They Shouldn’t

If this is your first puppy, let this be a fair warning. Puppies are inquisitive by nature, and they use their mouths to explore the world around them. They do not have the inherent skills to avoid things that may be toxic or dangerous – it is your responsibility as a pet owner to make sure they don’t eat anything that can be potentially fatal.

Because their digestive systems are so sensitive, puppies should not be fed from your table; humans love to experiment with flavors, and sometimes, these additives can make our animals sick. You can, however, cook specifically for them.

See also  How To Burp A Puppy ? Learn The Best Techniques

Puppies Can Have Diarrhea When They Are Stressed

Changes in the pup’s environment can be stressful, and this may cause a runny stomach. If possible, try to limit the exposure to the event causing your pet to feel anxious and ease them into new situations. It is also a great idea to get them into a set routine; that way, they know what to expect from each day – more or less.

How Should Healthy Poop Look?

Poops are considered healthy if formed (solid but not hard), medium to dark brown, with no strange objects or coatings. According to PetMD, there are four C’s that you have to consider when evaluating your puppy’s bowel movements.

How To Treat A Puppy With Soft Poop

Before you decide to treat your puppy at home, you must take a closer look to see if they present with other warning signs – apart from the soft poop. When your puppy has any of the following symptoms, it would be best to consult a vet before starting any treatments.

In addition, if your puppy’s poop hasn’t improved within 24 hours, or if the stool is bloody or black, at-home treatment might not be your best option, and you should get professional help.

What Can You Do For A Puppy With Diarrhea?

When there are no additional symptoms and your puppy is only just presented with softer or runny stools, there is a couple of things you can do at home to make your puppy feel better.

If your puppy has loose stools, the American Kennel Club (AKC) recommends feeding your puppy a bland diet and offering plenty of water. You can try the following foods AKC suggests to help settle the little one’s stomach. Remember to avoid additives like salt, spices, or gravy.

For puppies vomiting and having diarrhea, you must fast the pup for six to eight hours before trying the recommended bland diet. If your puppy is still not showing any signs of getting better after this, they’ll need medication.

It is imperative to remember that you should never give your puppy any medication unless a vet has instructed you to do so, more so with treatments meant for humans. More often than not, owners with good intentions cause more damage to their beloved pets in their attempt to treat the animals at home.

Slightly soft poop is not a big concern in puppies and should become more solid as they grow; however, watery stools are not typical. If your puppy’s toilet breaks do not improve even after applying some of the available remedies, consult with your veterinarian to find the reason behind the runny poop, as it can be a sign of something serious.

When Is A Puppy Ready To Sleep Out Of Crate? 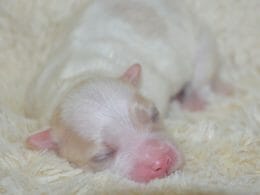 Why Is My Puppy Shaking? – A Guide For Dog Owners 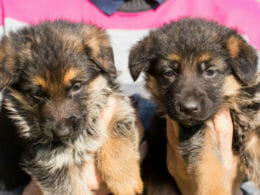 How To Burp A Puppy ? Learn The Best Techniques 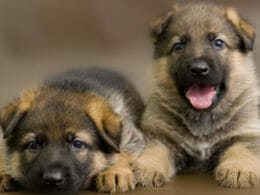