When Do German Shepherds Stop Growing?

Most German Shepherds will reach physical maturity when they are between two and three years old. Every dog matures at its own rate, with females reaching their final size and weight sooner. Here is everything you need to know about when German Shepherds stops growing:

When is Your German Shepherd Fully Grown?

Every German Shepherd is different and they can finish growing at different rates.

On average, though, male German Shepherds will stop growing when they are two and a half years old. Some dogs may continue to grow up to the age of 3.

Even though German Shepherds take long to reach full size, much of their physical growth is completed by the time they are one year old. After this point, they will often only grow 5 percent more in terms of height and weight.

What are the German Shepherd Growth Stages?

Here is a breakdown of the growth stages that your German Shepherd will go through until they are fully grown:

How Long is the Newborn Stage?

This stage lasts for two weeks. The puppies will often increase in weight from between 65 to 95 grams a day. They spend most of their time sleeping and feeding. A puppy at this stage can weigh as much as 4lbs.

How Much Will Dogs Weigh-in Transitional Stage?

This period begins when the puppies are two weeks old and end when they reach 4 weeks. They will continue to grow at a steady pace.

How Long Does the Socialization Stage Last?

This stage lasts until the puppy is around 3 months old. At around 2 months, your German Shepherd may experience a rapid growth spurt.

What is the Importance of the Juvenile Stage?

This period will last from 3 to 6 months and at the end of it, the puppy is considered to have reached sexual maturity.

When your puppy is around four months old, they will have reached the halfway point of their final weight and height. At the end of the Juvenile stage, they may have achieved up to 70 percent of their final size.

How Much Do German Shepherds Grow During the Adolescent Stage?

This stage takes longer – anywhere from six months to two years. By the end of the first year, your puppy will be almost as big as he or she is going to get.

How Big Are the Dogs at the End of the Adult Stage?

This can last until your dog is around two to three years old. As stated, females will reach maturity faster than males. Female dogs may be between 22 and 24 inches and 66 to 70lbs as an adult. Male adults may grow to be 24 to 26 inches tall and weigh 79 to 88lbs.

How Many Growth Spurts Does a German Shepherd Have?

There is no set number of growth spurts that your German Shepherd will go through. They will grow rapidly between 3 and 6 months and may undergo multiple growth spurts.

This depends on how big your German Shepherd will get and how well they are developing. Female German Shepherds or smaller dogs may experience fewer growth spurts.

Every dog is different and will grow and develop at its own pace. Frequent veterinary check-ups can help to ensure that your dog is on the right track.

How Can You Tell How Big a German Shepherd Will Get?

The eventual size of your German Shepherd is all up to genetics. Their parents’ size tends to be a good indication of how big they can get. You can also check with the breeder and estimate how big your dog may get.

It can be difficult to know how big your dog is going to get in its earlier developmental stage. By the time your puppy is one year old, though, you may have a clearer idea of their eventual size. They will not get much bigger than this.

Nutrition can play a significant role in your dog’s size as well. It may not have much of an impact on your dog’s final size but may determine how quickly your dog will grow. Proper nutrition can help your dog to stay on track.

This is especially true when your dog is experiencing significant growth. At this point, they should be eating high-quality, nutritive dog food, but your vet may ask you to avoid overfeeding your dog. An excess of calories may cause your puppy to grow too quickly, causing joint issues later on.

It is best to speak with your vet about proper diet and nutrition for your growing German Shepherd.

German Shepherds can continue to grow until they are three years old, although many stopped growing several months before this. Females will develop faster and will be considered physically mature sooner than males. Each dog may deviate in its growth and development patterns, so make sure that you keep your vet looped in on how they are doing.

How to Make a German Shepherd Happy? 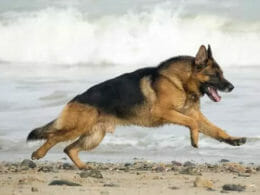 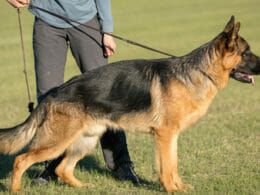 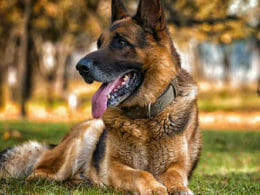 Do German Shepherds Shed a Lot? 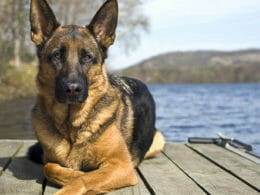