The laws of nature seem to make little sense when it comes to the birth of puppies. They are born blind and deaf with a brain that’s still developing. They are helpless and completely reliant on their mother. It’s rare for a puppy to be born with its eyes open, as the lids must stay closed to let the optic nerve and eyeball develop while protecting them both from outside influences. Little is scientifically known about why a puppy might be born with its eyes open, but it could have a range of impacts from eyesight issues or blindness to a higher mortality rate.

Why Are Puppies Born with Eyes Closed?

It seems like a danger to have puppies born so helpless, right? As part of evolution, species have either developed their reproduction habits to one extreme or the other.

Dogs fall into the second category. In the wild, the shorter gestation period works for dogs as the mother needs to be as mobile as possible to hunt. She does that every few days, giving her plenty of time to tend to the pups. In addition, the puppies don’t need to be able to run from predators as a baby deer would. In the canine world, the shorter gestation period makes sense, even if it means being born before the full development of all senses.

What is Going On Behind a Puppy’s Closed Eyes?

When the puppy is born, the eyelids are tightly shut. Behind those eyelids, the central nervous system is still developing the optic nerve. The eyeballs themselves are not yet fully formed. It’s not so much that the eyes can’t continue this process with the lids open, it’s more than the dangers of bright light, foreign particles, and bacteria that could inhibit the development process.

A breeder should never force a puppy’s eyes to open, especially in the first two weeks of life. In the majority of cases, a puppy’s eyes will open when they are developed enough to be exposed to the outside world. If, after two weeks, the eyes aren’t open, it’s time to talk to the veterinarian.

See also  Is It Normal for My Puppy to Eat Grass? - 6 Ways To Minimize Risks

What Do Open Eyes at Birth Indicate?

We reached out to some of the top names in canine health and nobody wanted to comment on this topic. Either it’s such a rare occurrence that they don’t want to speculate, or it’s such an intricate problem they don’t know enough about it to say anything definitively.

What we do know is that if the eyes are open, there’s a risk of blindness from being exposed to light and debris while the development is ongoing. Various social forums detail everything from puppy mortality after being born with eyes open to a perfectly healthy puppy who went on to be a great dog.

What To Do if a Puppy is Born With Eyes Open

Puppy’s eyes can “blink” partially when exposed to light while the eyelids are still closed. This isn’t a cause for concern.

Are Puppy’s Eyes Fully Developed When They Open?

Also no. The eyes start to open 10 – 14 days after birth. It’s a slow awakening. First, it might be just the slit of an eyeball, then a little wider as the days go on. Between two and four weeks, it’s important not to put bright lights near the puppies, as they can’t control their blink reflex too much just yet.

At first, the puppies will only be able to see shapes and movements. Even the eye color hasn’t fully developed at this point. Keep in mind at this time, the puppies are kept in a whelping box, under human supervision, with their mom almost always there. Their main tasks in a day are eating, sleeping, and excreting (even THAT task has to be helped along by the momma dog at first!). They don’t have much need for eyesight anyway.

See also  What Can You Give a Teething Puppy for Pain?

By 8 weeks old, the eyes have developed to their full adult capacity. What an amazing development in just 8 weeks to go from eyes sealed shut to full sight abilities.

What Other Eye Issues Can a Puppy Have?

There are so many issues that can impact a dog’s eyelid, eyeball, or optic nerve. It’s important as part of your daily process to check the dog’s critical areas, like the eyes, ears, and genitals, for any kind of issues. ‘

Dogs can see color, but it’s not the full-color spectrum humans see. They don’t have as many eye cones as humans do. They can see blue and yellow and can distinguish between the two. They can’t tell the difference between red and green, so they don’t get to enjoy the Christmas decorations visually. They might be technically colorblind when compared to a human who is colorblind, but they aren’t stuck in a world of gray and white.

Jay Neitz, a color vision specialist from the University of Washington explained it this way.

A lot of the time there are good cues to help them figure it out; for example, red objects tend to be darker than green objects. So, if it’s a dark apple, a red-green color-blind person would know that it’s probably a red one, and if it’s a lighter apple, it may be a Granny Smith.

What they do have is a better ability to see at night than humans. That’s because they have more rods in their eyes. The rod helps an eye see better at night and also makes the animal more perceptive to movement. This is why your dog might start barking in the middle of the night over what you perceive as “nothing”, but they might have seen something you couldn’t.

If you ever wonder why your dog’s eyes seem to glow at night or when you take a picture? That’s because of the tapetum. It’s a mirrored structure behind the eye. That mirrored reflection is re-processed by the retina and sharpens the image even in low light.

Tapetum: any of various reflective membranous layers or areas, especially of the choroid and retina of the eye

A Final Look at Puppy’s Eyes

A puppy will rarely be born with its eyes open and it’s a serious concern if it happens. Don’t just assume the puppy is “more developed” than the others. Major damage can be done to the eyes if you don’t take quick action. Three breeders who were contacted in reference to this article said they have never seen this happen, but it doesn’t mean it’s impossible. It would be a freak incident if it did, but it’s certainly a dangerous health issue.

Why Does My Puppy Pee So Much? 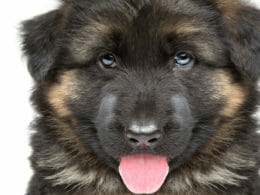 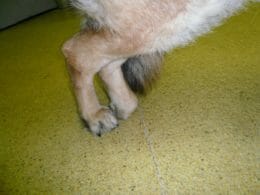 What Is Puppy Knuckling? 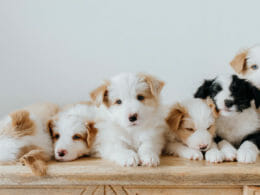 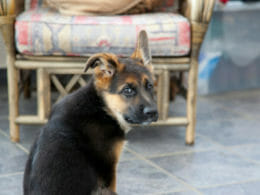 How To Train A Puppy To Be Alone