How Many Puppies Can a German Shepherd Have?

The number of puppies that German Shepherds can give birth to vary quite a bit. On average, this breed can have eight puppies in a litter. This number doesn’t tell you the full story, though. If you’re planning to breed German Shepherds, here is a closer look at the litter size of these dogs and what you can expect:

What is the Minimum and Maximum Size of a Litter?

It’s possible for a German Shepherd to have just one puppy in a litter. At the same time, this breed can carry up to 15 puppies to term at once. The largest German Shepherd litter recorded is 17 puppies.

Larger litters aren’t unusual with this breed and this is probably because of the dog’s size. If you are considering breeding pups, be prepared to take care of a larger number of puppies.

What are the Factors That Can Impact Litter Size?

It is possible to predict with some level of certainty what the litter size for your German Shepherd may be. Here are some factors that can determine how few or many puppies your dog may give birth to:

Does the Age of the Dam Matter?

The age of the dam is important when it comes to fertility as well as litter size. Most female German Shepherds will enter their most fertile period at the age of two. This continues up until they are five years old.

Between the ages of two and five is when the largest litters are to be expected. After this, the size may drop dramatically. It is important to stop using a dam once she becomes too old, as this can compromise the health and size of the litter, not to mention put too much strain on the dog.

Even if your dam is at its most fertile age, this doesn’t automatically mean that it will have the largest litter. The first two litters are likely to be the smallest. Due to this, you shouldn’t expect too many puppies in the beginning.

After this, your dam’s body will become more used to pregnancies and this can result in a larger litter. You can start preparing for a larger litter from the third pregnancy onwards. 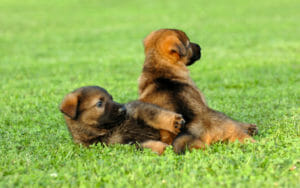 Do Healthier Dams Have More Puppies?

Needless to say, the health of the dam also has an impact on litter size. A healthier dam will certainly be better equipped to carry a greater number of puppies to term. These dogs also appear to naturally produce more puppies as well.

Nutrition and health are linked, which is why dams that have a better diet tend to have larger litters. It is important for female dogs to continuously have nutritious and well-balanced meals. In particular, they should have access to high-quality sources of protein.

Do Bigger Dams Have Larger Litters?

When discussing the size of the dam, it is the frame that should be described. A dog with a larger stature will be in better shape to carry a larger number of puppies – their body will simply have the capacity to do so.

Overweight dams, however, will not have this advantage. The more overweight a dog is, the smaller the litter will be. This is because a heavy dog is typically seen as being less healthy.

If your dam meets the standard for a German Shepherd with a healthy weight, the litter size may be larger. It is important to ensure that your dog maintains such a weight well before the pregnancy.

Is the Age of the Stud Important?

It may not often be taken into consideration, but the age of the stud matters as well. This is because its fertility can decline with age, causing the stud to produce less sperm. Due to this, they will not be able to fertilize as many eggs, causing a smaller litter.

Most dogs reach sexual maturity when they are a year old, but most breeders wait until the dog is older to begin using them. As for how old is too old, most experts would agree that it is best not to use a dog that is more than eight years old for the best results.

Is Inbreeding a Negative Point?

The level of inbreeding can matter as well. This refers to how inbred the puppies may be. If the dam and the stud belong to the same line, the litter will be smaller, in general. With unrelated dogs, there is a chance of the litter being naturally larger.

Dams who are inbred themselves will also produce smaller litters. This is true even if the stud is completely unrelated to her. This may have to do with the fact that inbred dogs are considered less healthy.

Is There a Difference in Litter Size for Natural vs. Artificial Insemination?

There is some evidence to show that litters that are the product of natural insemination may be larger. This is because, with artificial insemination, there is a greater chance of some of the sperm dying during the collection process. This will be less likely to happen when the breeding takes on a more natural form.

The number of puppies that a German Shepherd has can vary quite a bit. The above factors may help you get a clearer idea of what the litter size may be. During the pregnancy, an ultrasound may give you a more accurate estimate. That being said, it’s only after the puppies have been delivered that you can determine the number of true live births in later litters.

How to Tell What Color Your German Shepherd Puppy Will Be 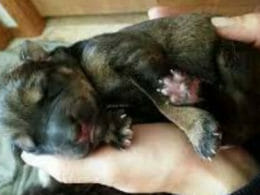 How to Keep a Newborn Puppy Warm 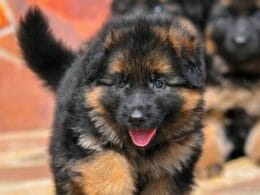 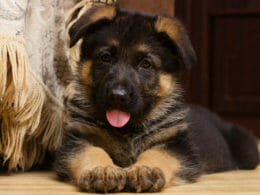 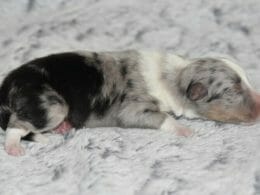 How Soon Can I Bathe My Puppy After Birth?