You’ve just noticed that your supposed “purebred” German Shepherd has eye colors that are not exclusive to its breed. They’re blue! Oh, the humanity! Fret not, this article should shed a bit more light on this uncommon occurrence, why it happens and how it affects you.

If you’ve been searching the web wondering, “what color eyes do German Shepherds have?” a good rule of thumb to remember is that the most common eye color for German Shepherds is brown. But green, gray and hazel-colored eyes are also normal.

More importantly, although blue eyes are rare, depending on the circumstances, they can occur naturally in German Shepherds. The recessive gene or a mutation therein, is typically the main reason as to why every once in a while, a black German Shepherd with blue eyes comes out of a German Shepherd litter of mainly brown-eyed offspring.

If you still remember your biology class back in high school with your teacher endlessly droning on about Gregor Mendel and his genetics work, then worrying about your black German Shepherd with blue eyes is a textbook example of this application. It’s also the reason why we get an albino genetic mutation and a list of unusual physical traits every once in a while.

Is my German Shepherd still a purebred if it has blue eyes?

Yes, but not necessarily.

To understand why blue-eyed purebred German Shepherds are such a controversial topic, it pays to know why purebred dogs are so highly-valued. See, a dog is defined as “purebred” if it is deemed by kennel clubs as

While the moral and ethical implications of breeding “purebred” dogs is another highly divisive topic in and of itself, for all intents and purposes, owning purebred dogs means incurring higher fees and higher maintenance costs.

However, this also means that the potential to fake breeding purebred dogs (via “puppy mills”) runs high; why spend so much effort on meticulous breeding, when you can get two dogs of different breeds that look similar and still charge top dollar for your work?

A common crossbreed is a German Shepherd-Husky mix (the Gerberian Shepsky!). Continuing on this line of thinking, blue eyes are a common trait inherent to the Siberian Husky breed and may be a telltale sign that your German Shepherd is not purebred.

Purebred dogs are typically associated with the following traits:

While mixed-breed dogs are known to exhibit the following:

It is important to note, however, that white German Shepherds (also known as White Shepherds) are recognized as their own breed, and should not be confused with mixed-breeds or an offshoot genetic mutation.

If you find cause for concern regarding your white German Shepherd with blue eyes (or any kind of dog with unusually colored eyes for that matter), do some research, reach out to your local vet and inquire about genetic testing for your pet.

Is it normal for German Shepherd eyes to change color over time?

Melanin as a contributing factor to German Shepherd eye color change was a fact mentioned earlier. This happens because melanin takes time to produce. Because this is the case, it is not uncommon for a baby German Shepherd with blue eyes to have its eye color change over the course of a few months. On the same note, it is normal to find puppies with blue eyes regardless of breed because of this lack of melanin.

In addition, it should also be noted that other eye conditions may result in eye color changes for your German Shepherd. For instance, cataracts may cause blurred vision and clouding in corneas, which can be mistaken for a milky “blue” eye color.

Other eye conditions like entropion (a painful disorder that happens when a dog’s eyelids fold inward) can damage your dog’s eyes by scratching the surface of the cornea which may lead to eye discoloration.

Check in with your veterinarian if you are unsure about your GSD’s eyes.

Typically, a dog’s eye color will stabilize when they are 2 months old. So if you still find yourself asking the question, “do German Shepherds have blue eyes?” and have a German Shepherd that’s older than 2 months, then technically the answer is yes.

Unless you plan on entering your blue-eyed German Shepherd into an American Kennel Club competition, you really shouldn’t stress out too much over it. All the more so if your German Shepherd is a puppy! More often than not, there are plenty of conditions that account for German Shepherd eye color changes or blue eyes outside of breed.

On the downside, this may mean that there is a small chance your German Shepherd is experiencing some kind of degenerative eye disease or disorder. But in any case, with the advent of modern technology, it should be easier than ever to inquire about your German Shepherd with blue eyes, including requesting genetics tests.

So don’t mind what other snobby, purebred owners have to say about your dog, and take pride in knowing that your German Shepherd has some absolutely brilliant, blue eyes (for the time being) that most other dog owners would envy! 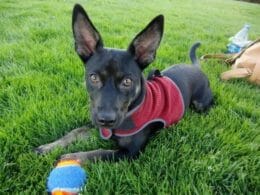 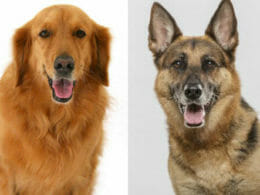 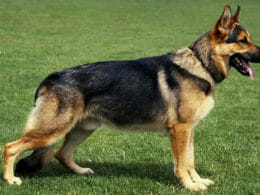 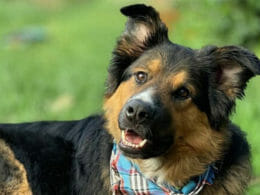