Sleep is a natural universal need. Even the smallest living thing on earth needs to sleep. Humans need 8-10 hours of sleep everyday. But, how much do German Shepherd sleep? Do they sleep like humans? What are the meanings behind their sleep positions?

This article aims to discuss these and other questions regarding German Shepherds and sleep.

How important is sleep for German Shepherds?

Sleep is as important as food for GSDs. According to dictionaries, sleep means to rest by being in the state of inactivity physically and mentally. But how important is sleep for GSDs?

How many hours of sleep do German Shepherds need?

GSDs, as we all know, are very intelligent and active dogs. Originally designed as working dogs, they tend to be more alert and protective of their packs. They might sleep less compared to other dog breeds, but their age and situation are contributing factors of how much sleep they need.

Young GSDs and puppies require 18-20 hours of sleep each day. Their growing bodies need more food and rest. Moreover, they get tired easily when training or discovering their surroundings so they need a lot of rest.

A healthy adult GSD might require less sleep since they are normally very active. They can sleep from 12 up to 14 hours a day. Since they are originally working dogs,being watchful and alert are their traits. They tend to be light sleepers due to their tasks.

Just like in human beings, the older the GSD gets, the more it sleeps. These senior GSDs usually sleep from 16-20 hours, where quiet rest is longer than real shuteye.

Different GSD Sleep Positions and What they might Mean

It is always adorable to see sleeping GSDs. These sleeping positions are also telltale signs of their current state of mind and even health issues.

Why do German Shepherds sleep upside down?

GSDs are protective dogs but when they sleep upside down, it means they feel very safe that they can doze off without worrying about being attacked by enemies. This also means they are submitting to their owners, especially when their owners are around. With their paws up,a German Shepherd sleeping on back feels relaxed and comfortable. It allows their muscles to be less tense. Cooling down is also a good reason for them to sleep in this awkward position.

Sleeping on the side

Why do GSDs like to sleep with their owners?

Warmth is the most unlikely reason for GSDs to sleep with their owners. As they say, there is safety in numbers. This goes true with GSDs. They feel protected and safe when they sleep in a group since they are less likely to be attacked by enemies.

How does my GSD feel when it sleeps curled up like a ball?

Curling up in a ball shape while sleeping makes them feel warm. This position allows them to stay warm especially in the colder months. They usually sleep in this position in their favorite spot for added comfort.

Sleeping on its front

This is the most natural sleeping position for GSDs. It allows them to stay alert while dozing off.

Why do GSDs sleep with their tail wrapped over its nose?

The GSDs nose is the most exposed part of their body during winter. Wrapping their tail over their nose means they are trying to protect their noses from the harsh elements like rain, snow and wind.

Is it normal to see a German Shepherd sleeping outside in winter?

German Shepherd Working Lines have thicker coat than Show Lines, so it is normal to see them sleeping outside during winter. Let’s remember that they are working dogs so they need to protect their territory from possible intruders or enemies.

A GSDs’ state of mind is also affected by the quality of sleep they get. Some sleep problems may appear harmless and cute but others are quite alarming and needing immediate medical attention.

Sleep is one of the basic needs of GSDs that can make a huge impact on their general health. The quality of sleep that they have usually affects their behaviour.

Sleep-deprived GSDs usually become irritable, aggressive and are more prone to illnesses. Making them feel safe and comfortable will encourage them to have the right amount of sleep. However, too much of a good thing can be dangerous.

GSDs who sleep too much, may need medical attention. Owners might find it cute to observe their sleeping GSDs, but this may help them prevent the onset of serious health issues.

How to Take Care of Newborn German Shepherd Puppies 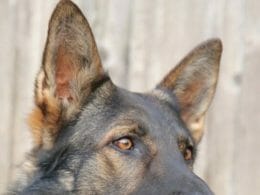 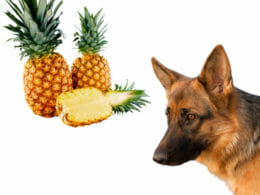 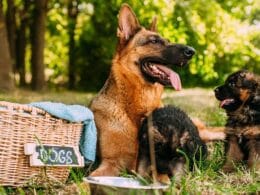