The German shepherd is popular around the world, especially in America. This might be the result of their many admirable characteristics. That’s why you’ll see lots of books about how German shepherds are loyal, obedient, and so on.

Well, that much is true, but as always, it’s not always rainbows and unicorns. What many owners don’t know is that the German shepherd is not the dog for everyone. As great as they are, there will always be cons of owning a German shepherd

It’s important to look at this aspect as well as the positive side. After all, being unaware of their negative aspect may make it harder for you to figure out the best way to take care of them. That’s why this article was made for the purpose of showing you the German shepherd pros and cons.

Pros of Owning a German Shepherd

Before we go to the cons of owning a German shepherd, you should first understand why they are worth buying in the first place.

We’ll also talk about the pros of German shepherds that you’ve probably never considered before.

German shepherds can learn almost any job they’ve been assigned to do. Along with Labrador and Golden Retrievers, GSDs are the easiest to train as service dogs.

This is why they are assigned to different roles. Thankfully, they were great at most of them, which takes us to the next advantage.

Perfect for Many Roles

Additionally, German shepherds were the pioneer of guide dogs, breeds that escort blind people. You can consider GSDs as the very first breed to become “service dogs”.

Their high energy level is one of the reasons why they are perfect for extreme tasks.

This might also be the reason why they became part of the military force in the past as well as today’s search and rescue teams.

However, you’ll find that this characteristic can be considered as a part of both sides of the German shepherd pros and cons.

Although they cannot stay in one spot for a long period of time, German shepherds know how to be sanitary.

Thus, you will only need to bathe your German shepherd at least once a month. This will be a simple task since German shepherds love water, as opposed to many other breeds.

German shepherds are loyal. That’s why soldiers can easily trust them to handle serious tasks. including search and rescue, guarding, and of course, military tasks.

In addition to being excellent in extreme tasks, German shepherds are also great show dogs due to their majestic distinctions.

This breed has at least 8 coat color patterns including black, white, blue, and more.

They also have a coat color exclusive to their breed which is black and tan in addition to their smooth curves. This is the reason why they are considered as canine royalty.

Despite the lack of double coats, German shepherds are still able to adapt to the weather, be it cold or hot.

This is because as herding dogs, it’s their nature to guard and herd livestock all day.

German shepherds have different coat colors, but the breed also has different types.

Depending on what you want your German shepherd to do, you can choose dogs belonging in either these five distinctions.

German shepherds are popular. That much is basic knowledge. But that’s precisely why almost every trainer you’ll meet will know how to train a German shepherd.

The demand for the breed also resulted in countless resources providing information about them. So learning about them is a piece of cake.

But just as usual with popular things, they tend to attract problems. So this is another one of those characteristics that you may consider as both a German shepherd’s pros and cons.

Cons of Owning a German Shepherd

The main focus of this list of German shepherd pros and cons is to make you understand the significance of the risks.

That’s why from this point, you need to make sure to spend some time understanding the following risks.

If you have German shepherds, expect to spend some time vacuuming or sweeping fur at least twice a week.

Also, remember that German shepherds shed 365 days a year so you can’t rest for a day.

They are also seasonal shedders, meaning there will be times when their shedding will increasing. This is particularly true in the Fall season.

German shepherds are loyal to a fault. This is evident in their destructive nature when being left alone by their owners. In this event, they tend to chew pieces of furniture, scratch floors, and more.

German shepherds take their jobs seriously. But if not given a job, they will find one themselves. As a result, they might do some things independently and cause problems later on.

Just as usual with herding dogs, German shepherds are natural barkers. This is especially true when they are bored. So in addition to being destructive, they may disturb neighbors if left alone at home for a long time.

The high demand for German shepherds caused many to stoop to puppy mills. And as you may already know, puppy mills are an unpleasant environment.

GSDs coming from them were bred poorly. That’s why good breeders of German shepherds are hard to find.

They Don’t Get Along Quickly

German shepherds take some time before warming up to new people.

Additionally, they are “one-person” dogs. This means they will only be comfortable in the presence of their owner. They can also become aggressive to strangers.

German shepherds can sometimes be dominant. In short, they will think they are superior to you. This might give you some problems with making them obey your commands.

You’ll also have to spend some time and effort with them as they are energetic. They are not for couch potatoes.

Overall, you’ll have to be ready to invest your time, effort, and even money on taking care of these dogs.

German shepherds are loyal, obedient, attractive, and more. But if you insist on looking solely at these factors, you might find yourself regretting your decision later.

It’s important to learn how to judge things equally. That is, weighing the pros and cons properly. That’s exactly we discussed the above German shepherd pros and cons.

We talked about the benefits that you already know while expanding it a bit further. This is very helpful because your knowledge was further increased.

But we didn’t stop at that. We also discussed the cons of owning a German shepherd and the risks of buying the breed.

Either way, this list of German shepherd pros and cons can be useful for when the time comes that you must make the final decision. 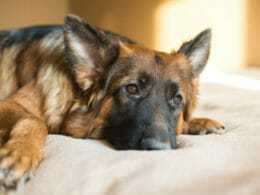 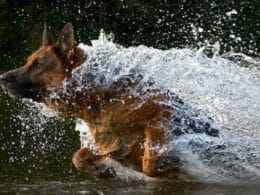 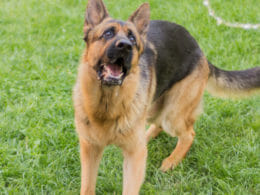 Why Does My German Shepherd Circle Me? 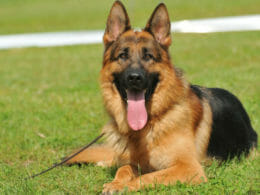 When Do German Shepherds Calm Down? – Know 5 Top Tips