How To Discipline A German Shepherd Puppy – 5 Best Smart Ways

German Shepherds make excellent companions and wonderful family dogs, but it may take a little work to get them there. While puppies are adorable, German Shepherds are notoriously difficult due to their high energy and large size. Some owners even affectionately refer to them as “land sharks” due to their tendency to playfully bite and chew. While they can be a challenge, consistent and effective discipline a german shepherd puppy can help them settle down quickly.

Start From a Positive Place To Discipline A German Shepherd Puppy 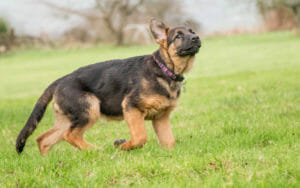 The first thing to keep in mind when you bring home a new puppy of any breed is that your puppy is learning a brand new set of rules. The things they did with their litter mates and their mother may not be okay in this new household. In addition, the world is suddenly a very lonely and scary place for a puppy who used to always be protected by his or her mother and siblings.

This is especially true for German Shepherds. While they’re a bold and brave working breed, they’re also very sensitive and form strong bonds with those close to them. It takes a little while for a puppy to form that bond with a new owner.

Sometimes puppies also simply are not developed enough to control themselves. Much like human children, too-tired puppies are prone to getting wild and misbehaving. They also experience teething pain, which may make them chew on many different surfaces in an attempt to soothe it.

With this in mind, it’s best to keep a positive and reward-based approach to your training as much as possible. Physical punishment, yelling, or other scary things often just confuse and intimidate puppies, since they don’t understand why you’re upset.

Another thing to remember about puppies is that they have very short attention spans. Whatever discipline you choose must be given immediately for it to be effective. A good rule of thumb is to make sure that any praise or punishment is given within three seconds of the puppy performing the behavior.

That means that if you come home and find that your puppy peed on the carpet, it’s too late for any kind of discipline. Your puppy likely won’t understand why you’re mad, even if it seems like he does. Instead, look at ways you can prevent it from happening, such as planning for more frequent bathroom breaks or restricting your puppy to a smaller area.

Consistency is key in training and disciplining any puppy. If you allow a certain behavior sometimes but ignore it or reward it at other times, your puppy will end up confused and frustrated. It’s a good idea to decide on general rules, such as whether the puppy will be allowed on furniture before you even bring the dog home.

If you live with other people, make sure everyone is on the same page with your training methods and rules. If someone else in the household is regularly allowing the puppy to steal food or jump up on people and you don’t, it can cause significant setbacks in your training.

One of the best tools for disciplining a puppy is simply taking away the thing that is exciting them. If your puppy is biting you too hard while you’re playing, try taking your hand away and turning your back for a moment. Turning your back on a jumping puppy can have a similar effect.

If the puppy is persistent, a small break in a safe spot can also help them calm down and settle enough to behave. A gated-off laundry room or a bathroom can be good choices for this. Don’t leave them in there for too long, but a minute or so to let them settle can have a big effect.

See also  How to Keep a Newborn Puppy Warm

When you do a time-out, it’s important to ignore the puppy. Don’t scold or act upset, even if you have to move the dog to another room. Just be calm and matter-of-fact about it. You want to make everything as boring as possible so that the puppy learns that being rude means that the fun ends for a little while. 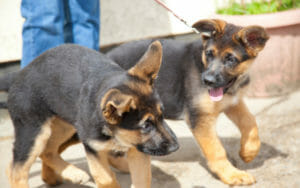 Imagine your puppy comes in carrying a designer shoe, or your favorite shirt, or any of a million other things you probably don’t want to be chewed up. It’s tempting to yell and scold the puppy, but that doesn’t teach anything. After all, for a puppy, there’s no difference between that expensive leather shoe and those fun chew toys sitting near it.

Instead of scolding your puppy, simply redirecting to a more appropriate toy is usually the best option. Trade a fun chew toy for the shoe, then put the shoes away somewhere else. One of the big benefits of this approach is that it also lays the foundation for teaching your dog to willingly drop things on command, which is particularly important in German Shepherds since they tend to be a fairly possessive breed.

Redirection can also be used for other behaviors. If your puppy tends to jump on people when greeting them, try teaching him to sit or lay down instead. You can even have a little fun with it and teach him to shake hands on cue.

If your puppy tends to get overly distracted or excitable on walks, it’s also helpful to teach commands that encourage a focus on you. Teaching a formal heel takes a while, but “watch me,” which requires the dog to look directly at you, can be a good way to help your puppy refocus.

Don’t be afraid to experiment a little bit with different commands. As long as you’re keeping things fun and positive, your puppy will probably enjoy it. Every dog is a little different, so try to figure out your puppy’s strengths and use those for redirection.

It sounds really good to say you should never punish your puppy, but it may seem unrealistic when you’ve got a wild little German Shepherd terrorizing your house. That’s where management comes in.

Make sure your puppy always has plenty of appropriate toys around, since puppies need to chew. Try to keep a good variety of textures and materials, and offer occasional treats like bully sticks or antlers. Talk to your vet about the best chews for your puppy.

Many puppies also thrive when kept on a regular schedule, including frequent nap time. Young German Shepherds may sleep up to 18 hours a day, so make sure your pup has plenty of rest. Over-tired puppies often have trouble settling down and may bite more than usual.

German Shepherds are also very clever, high-energy dogs, so your puppy needs plenty of stimulation. Young puppies cannot go for long runs or do other serious physical exercises since it can damage their growing bones and joints, but they still need to be kept occupied. Training, play dates with other puppies, and games such as nose work are all great choices for tiring out your German Shepherd puppy without overdoing things.

Although raising a smart, energetic German Shepherd puppy is never exactly easy, it can be very rewarding. Sticking to positive, reward-based methods and working with your puppy can help ensure you form a strong bond and raise a happy, well-adjusted dog.

Should You Let a Puppy Sleep in Bed With You?

How to Keep a Newborn Puppy Warm 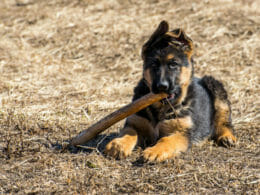 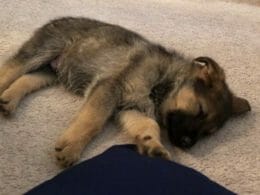 Why Is My Puppy Breathing So Fast While Sleeping? 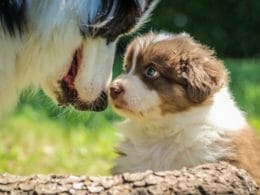 Can Puppies Go Out After The Second Set Of Vaccinations? 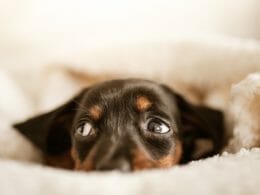 What Can You Give a Teething Puppy for Pain?