As a pet owner, you probably wondered at least once where your German shepherd belongs to in terms of coat color variations. Sure, it’s not exactly necessary since color doesn’t affect health or behavior, but you still have to wonder.

Is he a grey German shepherd, or is he solid black? Is there a chance that what you’ve got are black and tan German shepherd puppies? Curiosity sometimes gets the best out of us. Just as there are dog lovers that think of breed as the most important part of a dog, there are also those that value color more than anything else.

For the former, color can be simply black, red, sable, and such. However, there’s actually more into the color of a German shepherd than you think. Here we look at the different colors of German shepherds as we delve deeper in color genetics, origins, and what they mean.

There are different color variations of German shepherds. Some are accepted by the American Kennel Club and others are not.

However, the original German shepherd colors are accepted by most organizations.

After all, you can consider these colors as the different colors of German shepherds in the 1800s to 1950s. In short, they’ve been around for the longest time.

The original German shepherd coat colors consist of the following:

Contrary to what you may believe, these three colors are actually one of the most common colors of German shepherds. It’s just that it’s not common in places like America. There are, however, coat colors that are popular in America and other countries.

There are 8 main colors of German shepherds, which is considered to be the most common of all variations (around the world).

While you may view these colors as simply… colors, each of them is actually unique in its own ways. They vary in popularity, history, some of them even have another set of variations.

While these are the common colors of German shepherds at this point, times are changing. What happened to be rare today might become common tomorrow. Of course, common colors can also become rare at some point.

Speaking of which, there are color variations that are in danger of fading slowly in the German shepherd color gene pool.

Rare colors are usually a genetic fault. But while they can be considered a flaw in genetics, they are still the lovable German shepherds we know.

Also, these colors are usually a different version of some of the previously mentioned common colors.

These colors might be rare, but some owners are not even aware of how rare their German shepherd is. But what pet owners really don’t know about is the color change of German shepherds.

There have been asking this questions lately, which is perhaps because they are noticing some color changes in their German shepherd.

The answer to this question is yes, the color of a German shepherd can change as they age. However, the severity of this color change depends on the original color.

To give you a better idea, here’s a look at the different German shpherd coat colors that changes over time.

These two are the color variations that undergoes the most significant color change in German shepherds. While other colors change, too, the change isn’t that much.

There are, however, some German shepherds coat colors that do not change. In short, dogs with these colors live with it for the rest of their lives.

There are many people that have their own opinions, like those who think of color change as a modification in a German shepherd’s color genetics. If you take a look at it, it can be viable since it would explain why the original colors, black and white, doesn’t change colors.

However, some opinions are false. Unfortunately, there have been many misconceptions nowadays about the different colors of German shepherd.

Throughout history, there have been lots of misconceptions and myths made surrounding German shepherd coat colors.

These misconpcetions usually revolve around the unique color traits of German shepherds. There’s even a myth about the most popular color.

The tan in tan & black and red in red & black is often seen as two different colors of German shepherds.

However, these two are actually of the same color. The only different is that with the tan & black variation, the pigment is lighter while with red & black GSDs, the tan is darker.

White German shepherds aren’t albinos. This had been confirmed by many other veterinary researchers.

They don’t have albinism genes. They aren’t showing the symptoms of albinism. It’s simply because of a masking gene that blocks the ability to produce a black color.

The liver and blue color are faults in the color gene pool.

Despite being one of the common colors, these two variations aren’t rare. This is because the lightening of pigment is a common flaw in the color genes of a German shepherd.

Due to their unusual appearance, panda German shepherds are seen as mixed breeds by a poodle or chow chow mix dog.

However, panda German shepherds are not crossbreeds. In reality, the panda pattern is caused by a rare genetic fault, which results in few panda GSD in the world.

Bicolor is the Same as Black

Due to the resemblance of bicolor GSDs and black GSDs, the bicolor is often considered as black. There is a difference, however, and that lies on the traces of silver, gray, and other colors in a bicolor German shepherd.

Having a German shepherd, it’s only natural to wonder what lies deeper in your pet’s color.

Is it rare? Is it a genetic fault? Or is it a normal color?

After reading this blog post, you should already know the answers to these questions. Plus, we discussed the most common misconceptions about the coat colors of German shepherds.

You might’ve been unaware of where your German shepherd’s color came from. But after this, you can sit back and be assured that you achieved a better understanding of your cute pet.

When Should You Spay or Neuter a German Shepherd? 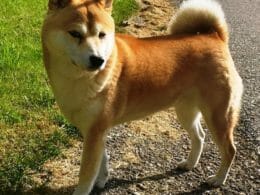 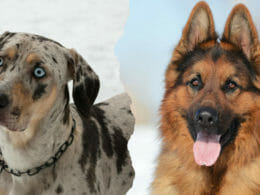 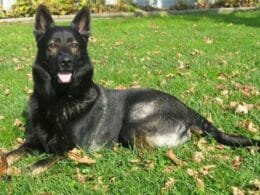 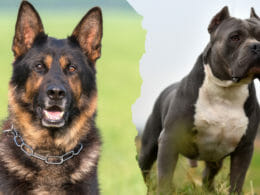