Caught a glimpse of a bi-color German Shepherd and want to learn more? You have come to the right place. This variety of German Shepherd has a beautiful coat and many dog lovers would like to own one. Below, you can find out what makes this pup so special, some myths debunked, and why finding a pup for yourself may be harder than you think.

What is a Bi-Colored German Shepherd?

The term “bi-color” can be confusing as most people are familiar with two-toned German Shepherds. Black and tan are the most common hues associated with this breed. So, what are bi-colored German Shepherds, in that case?

This term traditionally refers to German Shepherds that are almost completely black, except for small spots of lighter color throughout their bodies. These patches of color can be found near their legs, under their tails, in their eyebrows, or the face.

It should be noted that this term is only applied to German Shepherds with this specific coloring. Dogs with darker black and tan patterns aren’t considered to be bicolor.

The easiest way to know if a German Shepherd falls into the bi-color category is to check under the tail with black puppies. If there is a lighter patch of color, these pups can be classified as bi-color.

What is the Debate Regarding Bi-Color German Shepherds?

Not everyone sees bi-colored German Shepherds as having a coat of a different color. Many breeders classify bi-colored pups as simply having a pattern of their own.

Despite this, the AKC does approve and accept bi-colored dogs. They aren’t often found in show circles, though, as they are less likely to perform as well as their more commonly-hued counterparts. These pups may be more readily accepted in working lines, however, where they tend to do better.

Many German Shepherd enthusiasts may never see a bi-colored pup in real life, but just how rare is this dog? And is it possible to find one for your family?

Bi-colored German Shepherds aren’t as common as black and tan, or red and tan dogs. They still don’t qualify as having the rarest of coat colors, though. This distinction belongs to solid white, solid blue, solid red, solid grey animals.

There is also the fact that this breed is more common than most people realize. They are often mistaken for being black German Shepherds. Increased awareness of what bi-colored German Shepherds look like may result in more of these pups being identified.

All reputable breeders only consider health, physical traits, and intelligence when breeding animals together. They will often ignore coat colors as this has little bearing on the wellbeing or desirability of the puppies. Such breeding methods could ensure that the bi-colored German Shepherd continues to be an elusive hue for this breed.

What Causes the Bi-Color Coat?

It is only natural to wonder where these German Shepherds get their bi-colored coat from and why it is rarer. To understand this, you will require some background information on German Shepherd color genetics.

See also  How To Identify A Purebred German Shepherd And Puppy

With German Shepherds, colors such as sable as well as black and tan are considered dominant genes. If either of these colors is present in parent dogs, there is a higher chance of the puppies having coats with these hues.

This is why there is almost no way to predict whether or not puppies will be bi-colored. Instead, it is the luck of the draw. It also depends on the breeder you go to if you want a pup for yourself.

How Much are Bi-Colored Puppies?

As stated, bi-colored puppies will often show up in a litter without warning. This can make it difficult to determine how much these dogs cost. For the most part, the price will depend on the breeder.

Some people may sell these puppies for the same cost as regular Shepherds as they are similar in every way to their counterparts. A few breeders may capitalize on this unusual coloring and charge more for this unusual coat.

This may not always be the case if there isn’t much interest in pups with this coloring. After all, these dogs don’t always do as well in shows as traditionally colored German Shepherds, which is a pity.

There is quite a bit to appreciate and understand about bi-colored German Shepherds. Apart from their unique coats, however, they are just like any other dog in their breed. Their coat certainly does make them a more exciting prospect, though, and a great addition to any family. 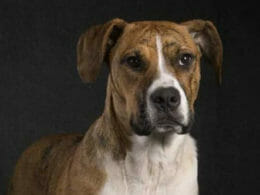 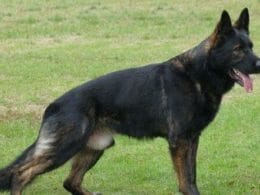 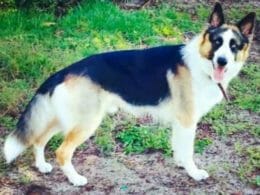 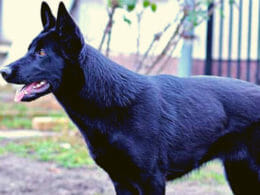