What is the difference between these two? Are these differences important? Which one is a better choice for me to get? Can I only train and hunt with a working Aussie? Is a show Aussie better as a house pet? These questions should be answered by every prospective Aussie parent.

But if you’re new to dog parenting and don’t know where to begin, worry not. We’re here to save the day!

Show Australian Shepherds are bred specifically to make them look as beautiful as possible. These are the dogs used in shows and contests where appearances are the most important aspect of the dog. For show dogs, achieving a high beauty rating is a primary goal.

At exhibitions and shows, traits like personality, activity levels, health, and work ethic are not judged and do not hold much importance. However, the way they look, their grooming, and their physique are very important.

What To Expect With Show Australian Shepherds

There are significant differences with show dogs compared to other kinds. Here are some of the traits you can expect to see with a Show Australian Shepherd:

Puppies that do not meet the standards for breed physique are often sold instead. They are then adopted as family dogs, and so you may end up with a show variety Aussie in your home.

If you think that what matters most is looks, then a show Aussie would be perfect for you. They would make for some great pictures, and you can even enter them into contests and exhibitions.

These dog shows take place in indoor settings and so do not have a lot of space for the dog to run around and release their energy. They are also expected to have good behavior and not be too energetic.

Additionally, the show dogs are kept in cases at the shows while they are not being presented. For this reason, it is helpful to have a less active and energetic dog. Show Australian Shepherds are then bred to be more relaxed.

If you want a friend to be physical and fit with, a show dog would not be the best option.

Additionally, since the coats of show dogs are meant to be thicker than usual, they sometimes have issues regulating their temperature. So, if you live in a quite warm area or do not have constant air conditioning in your home, this could be an issue.

The Need for More Grooming

Their coats also need to be groomed more often and very thoroughly. Show Australian Shepherds are more likely to develop matted fur. They will also shed more than a working breed. Thus, regular, and more hands-on grooming is a must for these Aussies. So, keep in mind that you will have to put in this extra time and effort if you wish to get a show dog.

Due to their genes, show dogs can often be more timid, insecure, and aggressive. These traits can be minimized with proper training and a lot of love, but it might be a harder process than with working Aussies.

They do not engage in any work like herding, hunting, or sports. This means that their discipline is usually not up to par. It also means that they have poor impulse control and concentration.

All Australian Shepherds are driven to work and be active but show breeds do not know how to release this energy. When they are stressed or agitated, their dark side can come out.

They could react with bad behavior like barking or tearing up the things around them. They can react in unusual ways, so such Aussies have a bad reputation when it comes to personality.

If you are not ready to put in the time to train a difficult dog, then a show Aussie might not be the best match.

Australian Shepherds were first bred in Western America. Their primary use was as herding dogs for cattle. For this reason, they were bred to be extremely active and strong with a high work drive and discipline.

They had to work with ranchers on their farms and would tirelessly perform their daily tasks.

These dogs were made to be easily trainable and to have strong bonds with their owners.

Working Australian Shepherds retained these characteristics. They are one of the most loyal breeds and are highly sensitive to their owners’ energy.

See also  Why Do They Dock Australian Shepherd Tails?

This makes them excellent hunting or sports dogs as well as phenomenal herders.

What To Expect With Working Australian Shepherds

Working Aussies can be very different from their show counterparts. Their traits might be very suitable for you or could even present some problems.

They are easily trained to perform tasks, do tricks, hunt and retrieve, and follow commands.

Due to extensive breeding and changes in the lifestyles of these dog, some of these traits are not always present. However, they are far more apparent in Working Aussies than in Show Aussies.

With working dogs, the emphasis is not placed on looks. Rather, they are judged based on their work ethic and performance. Their health and fitness are a top priority.

This leads to working Australian Shepherds having better immune systems than show dogs. In general, they have fewer diseases and contract illnesses less often than show dogs.

They are also less likely to have issues related to their musculoskeletal systems.

Not As Good In The Looks Department

Working dogs have a major drawback – if you want to call it that. And that is, they do not look quite as good as Show Australian Shepherds do.

They have smaller heads and weigh less as well. They are usually smaller in build and have shorter, less thick fur.

The benefit of this is that they are easier to take care of. The grooming process with working Australian Shepherds is far easier than with show dogs.

Another physical characteristic that differs from their show dog counterparts is their ears. They typically have upright ears rather than button ears.

Additionally, they may not have as many colors in their coats. Working dog breeders aim to have a solid-colored coat that is dark.

This is done so the Aussie doesn’t suffer from sunburn more often as their coats conduct heat. Thus, if you live in a very sunny or hot place, you will not want to have a Working Australian Shepherd live with you.

Working Aussies are remarkably active and need a whole lot of exercise. So, get ready to take your dog out on walks very often. If you are an adventurous person, this breed is perfect for you.

Australian Shepherds absolutely love the outdoors, so take your working dog out on a hike or bike around the city with them.

This does not, however, mean that these dogs will constantly be on play mode. Australian Shepherds sleep for around 12 hours a day.

They just need to have sufficient exercise in order to get tired and be ready for bed.

Working Australian Shepherds are highly intelligent. They are super cuddly and love affection. They are also fiercely loyal; and are, therefore, very popular among dog lovers.

The traits of Working Australian Shepherds can either be positive or negative, depending on your own needs.

If you have kids in the house, an overactive dog can be bothersome and destructive.

If your lifestyle is not very active, making sure your Aussie has had enough exercise can prove to be a rather difficult task.

Taking good care of an Aussie can be very time-consuming. So, if you do not have the time or the space for your dog to run around in, this would not be the right fit for you.

Of course, there are exceptions to the standards for both kids of Australian Shepherd. Breeders are trying to produce Working Aussies that are calmer so they can live comfortably as a family dog. They are also trying to alter show Aussies so that they are more suitable as companions or family dogs. They are being bred to have a better temperament and be more trainable.

We cannot yet tell if these efforts are working successfully. However, you must understand that every dog is different – and regardless of breed-based traits, have the potential to be lifelong friends with you.

Which Is Better Australian Shepherd Working Or Show?

Neither type is better, so you need to gauge your own needs and the dog’s needs when considering adopting an Aussie.

Both kinds have their benefits and shortcomings but are lovely dogs that should be given all the affection and care you can give.

Why is My German Shepherd Not Eating? 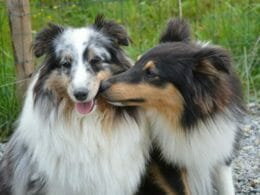 When Do Australian Shepherds Go Into Heat? 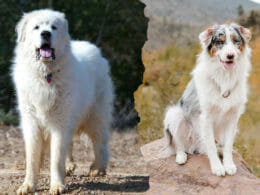 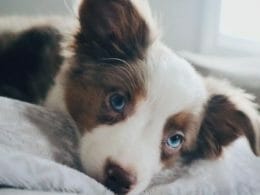 How to Care For an Australian Shepherd 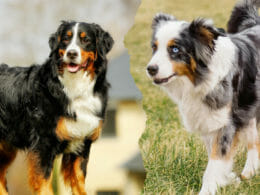