German Shepherds can be great guard dogs, but this can differ from one pooch to another. Find out why this particular breed is known for this role in the household and what you can do to encourage their guard dog tendencies.

It is important to remember that your German Shepherd is firstly a pet and not a guard dog. As such, you should treat them that way.

Don’t isolate your dog from the family for guarding duties. You should also avoid leaving your dog outside for extended periods. Instead, allow your dog to have guard dog duties, but don’t make this their entire purpose.

As their name suggests, German Shepherds were bred to herd sheep. As such, they developed protective traits, having to keep near-constant watch of sheep.

German Shepherds also had to spend many hours tracking sheep and keeping them safe from predators. This made them more alert and helped them to be courageous as well.

At the same time, German Shepherds also developed deep and loyal bonds with the shepherds they worked alongside. They are protective of children, in particular, and can be good at keeping little ones safe from strangers.

German Shepherds are also intelligent and self-confident, which allows them to assess a situation and take action. They aren’t readily fooled or distracted by perpetrators either.

These traits have been developed and preserved across generations. This is why even modern German Shepherds are often described in the same way. It is these characteristics that make German Shepherds such good guard dogs.

To round it up, German Shepherds are physically imposing as well. They are big, muscular, and can look quite scary. This works in their favor to keep unsavory characters at bay without much effort.

Although German Shepherds are historically known to be good guard dogs, this isn’t the case for every dog. For one thing, breeding can play a significant role.

See also  How Fast Can a German Shepherd Run?

German Shepherds fall into one of two lines – working dog lines and show dog lines. Dogs from the working line have been bred with the same traits that the original German Shepherds had. As such, these dogs will be a better fit as guard dogs.

Dogs from the show line, on the other hand, are mostly bred for their looks – head shape, physique, coat, etc. Due to this, breeders aren’t overly focused on the same traits as working dogs. These dogs are less likely to work as guard dogs.

Temperament matters quite a bit as well. Each dog is different. Some may be more assertive, while others may be shy. Whether or not a particular dog will be a suitable guard dog can depend on what kind of personality they have as well.

Can You Train a German Shepherd to Be a Guard Dog?

Breeding and temperament matter, but how important is training? It is possible that socialization and training can help to develop a guard dog. There are, of course, limitations to this, and natural tendencies may override training.

Most German Shepherds are incredibly intelligent and highly trainable. These dogs also enjoy having a job to do. Due to this, many German Shepherds do well in guard dog training. This is evidenced by the fact that this breed is often used by the police and military.

Guard dog is a blanket term. There are several different types of guard dogs. Before training your German Shepherd for such a role, you need to decide what kind of guard dog you want.

This is typically what a lot of owners mean when they refer to guard dogs. These dogs will be inside your home but stay alert. Their sense of hearing and smell are well-honed, allowing them to take note of anyone approaching the house.

They are trained to bark loudly to alert the family as well as to scare off any potential criminals.

Sentry guard dogs are trained to move around the property, paying special attention to the boundaries. These dogs aren’t often employed in homes but are better-suited for commercial properties. They are sometimes accompanied by a human.

If you have a doggy door that your pup can come in and out of, they can be trained as a sentry dog. Just make sure that they don’t spend all night by themselves.

These dogs can be trained to take a specific action if they notice a perpetrator.

These dogs are trained to attack on command. Most experts would advise you against training your German Shepherd as an attack dog. They have more violent instincts and it’s risky to keep them around families, especially young children.

How to Train a German Shepherd to Be a Guard Dog?

First, if you want an expertly trained guard dog, it is best to hire a dog trainer for this purpose. After all, you need to strike a balance between an alert and assertive dog as well as an obedient and caring one.

Not to mention, more progressive training can be tricky to master if you aren’t an expert yourself. Due to this, having a professional train your dog may help you out here.

As mentioned, avoid trying to teach your dog attack tactics. Not only is this dangerous, but many regions forbid homeowners from owning or training such dogs. Accidents can happen and you don’t want to be responsible for a dog attacking someone, particularly someone in your own family.

Many people mistakenly think that socializing your dog takes away their protective streak, but this isn’t the case at all. If your dog isn’t properly socialized, they will be wary and shy around all strangers. If they get used to other people, however, their confidence and assertiveness can come through, allowing them to be better guard dogs.

There is also the fact that you don’t want your dog to be aggressive around all strangers. This makes it tricky to have people over at your house or take your dog for a walk. Keep in mind, dogs without socialization can become problem pups as they get older.

Before teaching your German Shepherd guard dog tactics, they need to learn how to obey you. This is especially important when it comes to barking. Most guard dogs are taught to bark around suspicious sounds or people.

If you don’t teach your dog to listen to you when you tell them to stop barking, you will end up with a dog that barks incessantly. This can become a nuisance for you and your neighbors, especially at night.

Show Them Their Territory

Even if your dog is allowed to go outside by themselves, walk them on a leash around your property. Do this as soon as you bring them home. Your German Shepherd will automatically associate this space as being his or hers and will be naturally protective towards it.

Due to this, they will be alert when people or animals come close to what they consider their territory.

You want to create positive associations with your dog alerting you to strangers. One way to do this is to give them treats or pet them when they bark to alert you that someone is approaching your property or home.

With time, your dog will understand what they are being rewarded for and will continue this behavior. It is just as important that your dog ceases barking when you tell them to as well.

Know that German Shepherds don’t respond to punishment. Only ever use positive reinforcement when conducting any kind of training with them.

German Shepherds can make great guard dogs, but there are some exceptions. You also need to be careful of how you train your German Shepherd as you still want them to be kind and gentle. At the end of the day, they are still your loving pets.

Do German Shepherds Get Cold?

How to Cut German Shepherd Nails (In 5 Easy Steps) 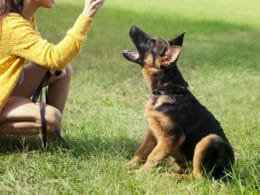 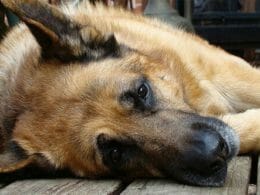 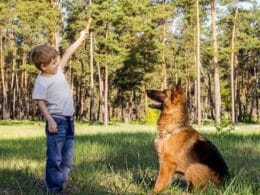 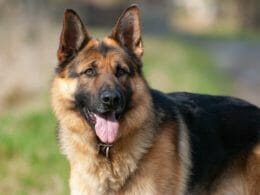